No matter what you fear or do not fear, you will still go down the path. That’s what the above quote means—to me, in my opinion.  I really wasn’t sure what I wanted to write about tonight. The above is yesterday and today’s quote from the new Zen calender I got at Michael’s yesterday.

Anxiety had taken a hold on my life a few years back. It’s always been there, in one form or another, but it always just seemed natural. Like back stage jitters before a performance on stage for either a group, or one of my solos. It always came in the form of, “Oh God, I really gotta pee.” “Do I have enough time to run to the bathroom, strip down from whatever I was decked out in, in however many layers, try to organize it back to an acceptable form for the stage, and be ready for the first note, to step out there?”

But in early 2015, depression and anxiety were taking hold and by March, I had to take a trip to the hospital for treatment because I was cancelling on clients for my Mental Health Certified Peer Specialist job. Cancelling became my “regular” thing. I’d be tensed up, shoulders up to my ears, pacing back and forth in my bedroom. Between the bedroom and bathroom. Between the bedroom, bathroom, and kitchen. Throw in a few soaks in the tub. I’d be so nervous and anxiety-ridden that I would just be drying off, still half-in and half-out of the tub, when I’d plop right back into the tub. I’d nervously look at a clock, my insides churning with nausea and piercing heat coursing through my veins.  Feeling dizzy and wondering when I would finally vomit. Finally it would just get too late to get dressed and “Look the Part” of a professional, so I’d call my clients and cancel. Then I’d pace some more and call my supervisor…or text her. Finally after a week or two, her and her supervisor called me. “No, I don’t know what’s going on. I’m nervous. I think I’m going to puke. I can’t do the paperwork. Everything seems so overwhelming. I don’t think I can make it out the door, into my car, to the office, and to so-and-so’s home.” “I need time.” “I can’t get everything done you request me to do.” The psychiatrist wrote a note for only 5 clients, but that was still too much for me. I had also been having suicidal thoughts….with a plan….and they all knew. So after I got out of the hospital, I made the decision to leave my part time supplement job and remain at home. Where I have been to this day.

Shortly before that, in late 2014, I returned to my love of veterinary work and was working at an animal shelter. I had had major shoulder surgery that took 5 hours, instead of 2 in February, but I thought I was able to handle walking the big burly dogs. What I didn’t anticipate was having to transfer the leashes from my right shoulder….which still has a tear in it and needs to be repaired, to my entirely messed up, but repaired left shoulder.  I didn’t expect cleaning the dog kennels to totally wipe me out so that I was barely able to move from pain and exhaustion, every day. I also didn’t expect to be left alone to deal with about 30 dogs, mostly big, by myself with hardly any help. I cried most days while working. Then I requested that even though I am a dog person, if I could be with the cats 100% of the time….because I thought this was easier. So there I was still scooping poop, but this time of 150+ cats in the mornings, sometimes by myself. I actually loved the quietness and just talking to the kitties. I thought I was doing good.  I had a workable system down for me. Then they asked me to come in the office. They told me that it seems like I “wasn’t there,” like I was, “somewhere else.” I still don’t know where my mind was supposed to be…I was scooping poop and spraying chemicals in cages and wiping them down. I enjoyed doing the treatments, tremendously enjoyed it. I enjoyed feeding them and nuzzling them and giving them time out of their cages. This greatly affected my mental health.  I just didn’t expect the bending to affect my fibromyalgic body so much. I didn’t expect the comments to affect me so much, to this day. I’m afraid to show my face there to volunteer because I’m afraid they think I’m “crazy” and an embarrassment, a failure. I also never expected to have to consistenly, and daily (4/7 days) have to try to lift 50+ pounds of cat litter, well, hoist it into a 5 foot dumpster without stairs, multiple times a day. I’m 5 foot 4 inches. It was a chore. All this while I was still holding on to some clients for Peer Support during my shelter “off” days.

Needless to say, all this greatly affected my positivity and will. And I resigned at the end of the year from the shelter. I went back to Peer Support with more hours. I was ok for January and a week or so in February. Then those depressive thoughts entered in more and more…on a loop. And then the suicidal thoughts…and a plan. I had lost my therapist to leaving for personal reasons and was put in with someone who would make degrading comments about something I illegally did whilst being overmedicated many years ago. It is an incident that is highly embarrassing and only a few seem to really grasp how that, too, has affected me.  That winter and spring were incredibly tough on me. It brought about a great amount of fear in me. I was afraid of everything. Of what people thought of me. I couldn’t bare it any longer.

Over the past few years, we thought that the anxiety was from a number of things. In December 2015, February, and July of 2016, I had kidney stones. The first CT scan also picked up a mass on my right adrenal gland. Everybody said not to worry, it was “just” an adenoma. I had gotten in with an endocrinologist, who ordered a CT scan with dye in June 2016. Everytime a CT scan was done, the tumor was greatly increasing in size. The CT scan in June showed that the tumor was malignant. I did not get this news until almost August, as that is how backed up that endocrinologist’s office is. I had immediately gone to the local health food store and bought 240mg CBD oil. I took 10 drops twice a day for a month. The adrenalectomy with tumor removal was scheduled for September 30th. We will never know if it helped stunt the growth of the tumor. I’d like to think it did. But it didn’t have any effect on my pain, to my recollection.  Or anxiety. Post-op labwork showed my cortisol level was at 0.1 units, when it should have been at 10 units, at the lowest end of the scale. So my tumor was also bio-active, spitting out a ton of cortisol making me a little nuts, always in “fight, fight, or freeze” mode.

For the next month I was on cortisol replacement and was feeling wonderful, hardly any anxiety. But that crept back at the end of October and definitely the beginning of November. The fear was back. And so was the fear to crawl from out beneath the covers. What to do?

We discovered in October 2017 that my Latuda was too high, with all the other medications and supplements I was on. I had all signs, but the high fever, of Neuroleptic Malignant Syndrome, as stated in the package insert for Latuda. From what I have understood, it is similar to Serotonin Syndrome. The Latuda was lowered. 2 days later I had my 2nd reconstructive surgery and a week and a half later I had my 2nd Sympathetic Trunk Nerve Block for CRPS/RSD. The anxiety was doing better. But was still gripping me in the gut and I swear, making my pupils dilate and I was still trembling and tensed up.

Add in some severe pain days about a week after the lumbar nerve block and I finally said, “The hell with it, it’s going on the credit card” and ordered the Hempworx Peppermint 500mg CBD oil  (link for more info: my hempworx site). I started it about a month ago. I am down to the bottom of the bottle. The 2nd bottle is on it’s way here. I can tell you the physical symptoms of anxiety are just about 99% gone. I had noticed a difference in about 2 weeks. It feels great. But sometimes the thoughts are still there. But now I have the strength to redirect my thinking into the present moment with some mindfulness and quick meditation MOST of the time. I don’t let that fear grip me any longer. It has been great.  I will post the benefits toward my pain another time, since I want to just focus on the anxiety and fear aspect. I have been up to the full dose of about 20 drops sublingually (under the tongue) and holding for at least 30 seconds, twice a day for 7-10 days. My sleep is also better and I have stopped most of my nighttime herbal remedies for sleep. I will focus on this, too, in another post.

My greatest fear, seeing that I can not work, is that I will not be able to afford the CBD oil on my income. And the anxiety, pain, and insomnia will return. I have been looking for a “quarter-time” job for some time. I’d LOVE it if a veterinarian would hire me a few hours a day to just do microscopic work, or blood draws or IV placement……hands-willing-to-work-I’d hope. That just doesn’t seem to be out there. I want to do something that involved the knowledge in my mind for science, biology, and spirituality. That is my hope for this year, to find somewhere I am needed and can feel a sense of contribution towards a more positive world. All while having this anxiety and gut-wrenching fear be totally reduced. 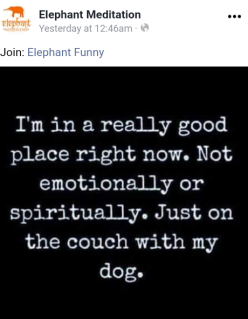 2 thoughts on “To Fear or Not To Fear”