For those of you who have read this in the past two days already, thank you. It was nice to share with you. I am re-sharing this because I published it less than 24 hours before the big Superbowl, and I don’t think it got out to too many people. Domestic Violence is something close to my heart and very important. I want other victims, survivors, thrivers, and psychiatric staff to realize that this takes YEARS to work on. This CAN NOT be “healed” in 10 sessions, as I was told. Maybe for tomorrow I will share how the system has failed me multiple times, over the past 2 decades. If you know someone who is suffering in silence, please be there to support them and refer them to a QUALIFIED Abuse counseling agency. NOT all are qualified, including some in so-called Sexual Abuse Counceling centers. Don’t forget…this is YOUR counceling session….YOU have EVERY right to ask your counselor you were probably assigned what their history is in trauma. Don’t be poo-pooed and talked into sharing your story and trauma with someone who has not known trauma themselves.  It takes time to become comfortable with a confidante and be able to share (probably) intimate and embarassing things of what you went through. But there is Hope! Don’t give up! EVER!!!!!

Link to above Gaslighting article by Alex Myles.

Link to EJ article on Anxiety and what everyone should know

I have been trying to write this post since Friday morning. Maybe even before then. But Friday was the straw that broke this camel’s back. After waking up in a panic attack 3 times throughout the night with my heart pounding in my ears so loud that I thought I had gone deaf, and a heartrate still over 100….while sleeping…it was time to call the doctor. My family doc had put me on 10 mg propanalol, twice a day, in mid-December. We had discussed the benefits of being on a mild medication for lowering my chronic tachycardia after nearly 2 decades of it frequently beating fast.  Don’t worry, it hasn’t been ignored. We’ve gone through years of, “let’s try this” with holistic practices and other medications. We even took out a malignant bio-active excess-cortisol-producing adrenal tumor and did an adrenelectomy at the same time September 30, 2016.  What had brought up my specifically asking for propanolol  (which I mentioned in a previous blog, somewhere around December 11th, 2017) was that my psychologist/therapist does research into alot of medications and supplements and how they affect certain populations with mental health symptoms. One thing was PTSD in veterans and propanolol usage. It curbs the physical symptoms of “Fight/Flight/Freeze” reaction. It can also do some other things to help, but we’ll stick with that main point right now, as I am having some brain fog on the details and don’t want to give false information.

Since starting the propanolol, the lowest my heartrate has been is 96….after 20-30 minutes of meditation…in a tub of hot water. For a long time it has been about 125 beats per minute (BPM). With now it being about 108. Normal humans should be, eh, we’ll say an average about 60-80. As a former athlete, who gets pegged as an athlete at every new doctor or therapist (including biofeedback), my heartrate should be below normal. Apparently I “breathe backwards,” as many a medical personel has stated, which is common in athletes, they told me. And as a I side note, I remember saying that I wasn’t breathing right to my mom when I was in elementary school. Let’s say there was only about 5 years of tap, ballet, and acrobats under my belt at that time like twice a week. I am still considered athletic by my docs, even with some excess pounds. Which I think is from my sad sedintary lifestyle because of my foot injury and chronic illness.

When my doc put me on propanolol, she said I had the ability to increase it, as I (a medical professional, albeit veterinary) saw fit. Just wait about 2-3 weeks in between increased dosage and let her know. Well, after a month and a half, or more. The time has come. So I called in and said I’d like to increase it to 20 mg twice a day. So thankfully, they called in a new script for me. So we will see how this goes.

Now, why did I include those articles up above? If you have read my other posts, you may know already that I am a survivor of domestic abuse and sexual abuse as a child. Yes, Me Too. That first article is from 2015 on Elephant Journal. I saw it posted sometime in November or December of 2016. It shocked me. That was my life with a few boyfriends, and even friends, but most of all….that was my life with my ex-husband. Now I’m sure, if you met him right now (this is judging how he was 20 years ago, not the person he has hopefully matured into; the person I do not, nor do I care to, know) he would charm the pants off you and bat his big brown puppy dog eyes and eyelashes your way. He (20 years ago) would convince you and his audience that I was blowing things out of proportion and I just didn’t “have a sense of humor.” As I type that line I think of when he, his sister, his best friend, and I  went to a resturant and he ran out to the car so that he could drive off and leave us there. He thought this was the funniest thing ever. As he did this and I was trying to unlock the passenger side door, and the other two were banging on the car doors to let them in, he backed up the car…onto my right foot. And stayed there a little longer than necessary. The other two were screaming at him that the tire was on my foot. I was starting to feel intense pain and I’m sure, panic. I remember the look on his face. Almost a sneer like a half a second before the concern and “Oh, what did I do?” washed over him. These things were funny to him. Calling me “nicknames” as he called them, but they had a sting and a hurt to them. “Talking,” ehem, guilting me into doing things I did not want, care, or felt right about doing. Only to say it was because, “I didn’t love him enough.” And, “If I loved him, I would do it.” Being with him from 1994-2002 was emotional blackmail on my body, mind, and soul. Finally, the divorce went through on paper April 4, 2004. So we’re done, right?

I thought I would be “over IT.” Here we are, almost 14 years later, and I’m still terrified. Just yesterday I had something horrendous happen that sent adrenaline pulsing through my body into a panic attack. I went to comment on my one friend’s post and saw a previous comment….from his aunt. How in the hell does his aunt know a friend originally from another state? My first thought was, “Oh God, they found me. He’s going to get to me. He’s going to convince everyone I made everything up (even the strangulation of my one dog in 1999). Everyone will say I’m a liar and not believe me.” Plus ALOT of other self-talk that was horrible. After all, he told me I had made up the sexual abuse from 4-11 years old by 3 females, and on top of that, he deemed me a lesbian. THIS is the support I got when I finally got comfortable with him to share a deep, dark part of my history.  THIS was supposed to be my most trusted confidante. So I pushed that memory away and buried it for many years. Until it emerged in my first psychotic break when he left me in June 2001.  But for about 6 years, I had to hear, “You’re a lesbian, that’s why you don’t love me.” I won’t even put down the more graphic things he’d put me through.

Here, it turned out, in some crazy Universal joke on me, or maybe kizmet, my friend’s husband’s first girlfriend, was my ex-husband’s cousin. That aside, I think I need to move to the moon now. Or maybe I just need to face the fact that because of his lifestyle and family members, in this and surrounding counties, that I will eventually run in to someone. There is some lesson to learn here, but I just do not know what that is….Hey Universe? I’m listening!

Which brings me to my nightmares. They are not just nightmares…..they turn into flashbacks during the day when I see something that “tips me off” to something that happened in the dream. Then I have flashbacks of stuff that he (or others) really did do to me. It brings on anxiety and panic attacks. I have to work really, really hard to reframe those thoughts and try to find the positive lesson that is there behind the flashback or nightmare.

And to be quite honest, some dreams and nightmares from when I was younger still haunt me. I get flashbacks of them, too! I’ve had so many traumatic things happen that they are changing the diagnosis of PTSD to Complex-PTSD. Just this week, I’ve had several nightmares-turned-gorey and horrific dreams about me being bullied. If you read the article that is a screenshot, the first link, it says about being stronger, after the fact. I am stronger. I have come a L-O-N-G way over the past 18 years from marital abuse….and rape. Yes, I have fear, anxiety, and panic. But I deal with it. Sometimes I think, “God if I read any more positive quotes, I’m going to barf.” I research positive role models an authors. I can’t say I’ve finished most of their books I have bought. That’s when the supposed Adult ADHD takes hold. (****SQUIRREL!****)  But I am trying my best. Ever seen that meme on Facebook of Alice talking to Dorothy, and one of them says, “I’ve seen some weird shit.” Yeah, that’s me (and a lot of other Chronic Babes and Dudes out there!). 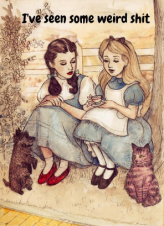 So if you’ve had similar experiences to mine, don’t give up. Today while driving, I had thought, “What the hell am I doing?” I was taking Simon to the Barkery for treats. But then I kept driving, took him in, got his treats, and we went on our way. I continued. I perservered. I. Will. Find. A. Way. And you can, too. Be gratful. Be kind. Always. 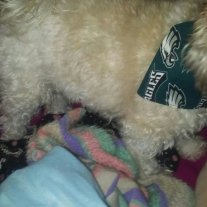