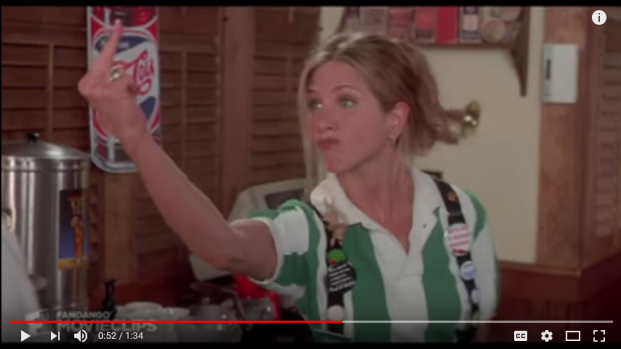 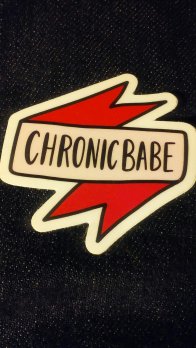 This is me….expressing myself….to my GI/IBS/Fibromyalgia/CRPS/RSD Flare for the past week: JoAnna’s Flair in Office Space .  The previous clip is from the 1999 Mike Judge film, “Office Space.” JoAnna is plagued by her pieces of flair she has to wear, and as you can see, has had enough.  There is a good friend, I will call, “D” going through a flare this past week, too. And a few other Chronic Babes I heard of through social media are really struggling right now. SOOOOOO……basically, this is what I’d like to do to my flare. It has been keeping me alternating between the bed and “hot” tub with epsom salts and an alleviating pain blend of essential oils for 5 days. Then last Thursday was ok. Friday was great. Then I started with a migraine again Saturday. I spent the weekend in bed and the tub again.  At least since starting the CBD oil, I’ve been sleeping through most of the nights in the past 6 weeks or so. Last night, however, I was wide awake for parts of the night. But I was able to ride along and help a friend out with answering his phone for his business today. It was about a 4-5 hour day, so not too long. But boy, was I famished by the time I got home!

Thursday, I had gotten out and went to the produce market and got another over $40-worth of vegan goodness from vegan companies and produce. I had 5 or 6 bags of groceries to carry up to the house. I ended up making some baked portobello mushroom steaks and this really weird, but delicious cauliflower soup. After tonight’s dinner, there is just 1 serving left….for me!!!! I steamed 1/2 head of cauliflower in the rice cooker, then blended that with Ripple unsweetened Pea Protein Milk in a blender. As it ended up, I used the whole 1/2 gallon of pea milk. I added some Pink Himalayan Salt…about 1/4-1/2 tsp. Then about 3-4 dashes of Yuengling’s Smoked Sea Salt.  I shook some parsley flakes in there, until it looked ok to me. I then dumped garlic powder into the cap and decided it was way too much, so only poured in some of it. It was pretty powerful, so I’m guessing it might have been 2 tsp. (lol. Vampire Killer.) THEN….I added a bit too much tumeric powder….which I did measure….1 Tbsp. BUT, as it turned out, with the following veggies and toppings…..the soup just turned out delicious.  Like I said, it seemed weird, so I searched through the cupboard and found some canned potatoes, green beans, and mushrooms….all probably from the stoneage. At least the potatoes were, because I can’t remember buying them….ever….lol. I cooked everything in the rice cooker for about an hour or two. Then I got fancy and topped off with some blended Daiya Cheese Shreds, Tofutti Sour Cream, and parsley flakes. I have been enjoying it for the past 4 days. 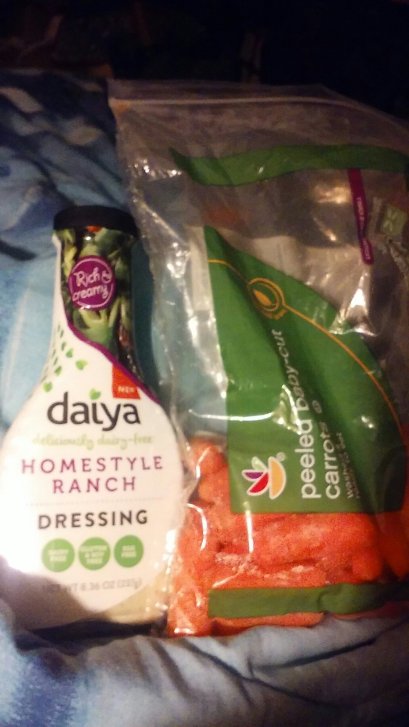 I also have had the pleasure of snacking on these delicious items. The Daiya Ranch is my favorite for crudites. The ice cream I just got yesterday….it was on sale!!!! Baby carrots are a big hit here about 9pm. Mr. Piggers and Simon get at least 2 as treats for bedtime.

So in closing, I will wish you good luck in the next week. Hopefully I can get back to blogging almost every day again. I’ve just been so out-of-sorts the past week!  I just heard today that this week is supposed to get really cold and snowy here in NorthEastern Pennsylvania. So stay bundled up and cozy!!!!! 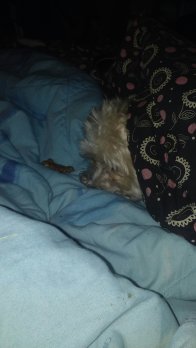 Above is Simon all bundled up yesterday, and Arthur stealing my pillow and Wicket W. Warrick the Ewok.