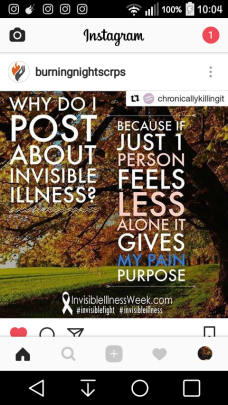 Hello fine readers of my blog. I had originally, back in December 2017, wanted this to be a blog of wellness and what I utilize with my chronic illnesses to stay well. It is still that, but on a deeper, more personal level. I know there are only a handful of you reading this that know me personally, the rest of you live all over the United States, and one or two in other countries. It’s amazing that my voice has gotten that far from Schuylkill County, Pennsylvania. I have been an advocate for Mental Health Awareness for about 13 years. Maybe more. I have been an advocate for Fibromyalgia, but not as strong of one, I believe. I am beginning to be an advocate for Complex Regional Pain Syndrome/Reflexive Sympathetic Dystrophy (CRPS/RSD), a rare disease. Being an advocate for health seems so common in my circle of friends, as we all seem to be an advocate of at least one health issue…to try to find resolve, treatment, comfort, and most importantly to me….an understanding in what “we” are going through.

Since my last blog, I have been suffering and surviving the ups and downs of severe depression, with the brief elation of hypomania, and even some times of even-keeled steady moods. Last Saturday….about 10 days ago, I was on day #3 of a week-long migraine. I was incredibly miserable at times, yet sometimes happy because I was animal and house sitting and had “my angels” keeping me going. Even if most of the time I was laying on the cot, in the spare room with my arm or a lavender pack over my eyes, wanting to barf. What made me even more active was that Simon, my Emotional Support Dog, was in a bout of gastritis. This has been his third major bout over his 4 year lifespan. This has been the worst bout….even worse than his first bout which landed us in a veterinary emergency hospital on a Sunday morning at 5AM 3 years ago. Even though he has another few days of medicine he has to stay on, two days ago he returned to his chipper self and was chasing our cats off of the bed because they got too close to his food bowl. Yesterday, even with my what seems, ever worsening foot problems, we went for a walk in the local park. I walked more than I thought I would be able to and he played with 4 dogs for a bit and was incredibly happy. If it wasn’t for him and animal sitting for my parents last weekend….I don’t know where I would be today.

Like I was saying, 10 days ago, the shit basically hit the fan that Saturday night. I was absolutely miserable. I was dropping so many F-bombs because of my personal internal war of mental health frustration with depression and anxiety and my intense physical pain from the migraine, fibromyalgia, and CRPS. I could think of nothing better than laying down and just fading away into the stars to move on to my next experience that The Universe would hand me. I couldn’t take it. I raised my voice. I yelled. I cursed. ALOT. I’m sure every sentence had at least a few explitives in them. And multi-syllable words had the F-bomb implanted in it. I was miserable. I was angry. I was tired. And my poor husband heard it all. In very colorful and tear-filled detail.

There is nothing worse than feeling alone in your various pains. No matter how many times a few friends said to reach out to them, I did not want to bother them with my bullshit and whining. They have their own pain and life circumstances to deal with. I don’t want to be an added burden and add more crap to their crap bucket of life. I have been very frustrated. I want to be heard. I want to be understood. I am not looking for more pills, which I think is what my psychiatrist thinks. And I’ll have to deal with this issue assertively this Wednesday. If anything, I am looking to discontinue the psychiatric medication. Why? I have been researching for many years, and found natural supplements to benefit me in the ways I need internal support. I have learned and found self-care and self-awareness to be of the upmost importance. These supplements don’t have the side effects, especially the liver side effects that these medicines that I’ve really had the doctor decreasing since October, have. My CT scan in June 2016 showed a swollen liver, while looking to see if my adrenal tumor was malignant. On the follow-up CT scan, in August, about a year after surgery to remove said malignant tumor and my adrenal gland, the liver had looked normal. But the accompanying bloodwork had shown I now had hyperlipedemia (fatty liver). How does someone who has been eating plant-based (vegan) for 5 years have a fatty liver? I had been telling my psychiatrist each liver update, but he did not seem to make a connection to the psychiatric meds. Even though the handout from the pharmacy said liver problems.

Last Tuesday I saw my very wonderfully awesome family doctor, whom I have been seeing since about 1995. She has been with me through EVERYTHING in my adult life. The bloodwork she ordered, and I had pulled last Saturday morning, was mostly normal. Liver values have returned to normal. BUT my triglycerides are high. She can’t figure that one out, either. This has been an on-going “fluke” since I was a teenager with my first doctor I had until he retired when I was 19. I was worried my habit of coconut oil and avacado eating could be the issue. Nope. Thank God….I thought I’d have to give up guacamole for a minute. But even back in high school, I was a vegetarian who (stupidly) cut out, like, all fat. But it was the late 80s and “all fats” were bad. So who knows where this 25-ish year occasionally high triglycerides issue will lead me. At least I can have guacamole, as I did last night. 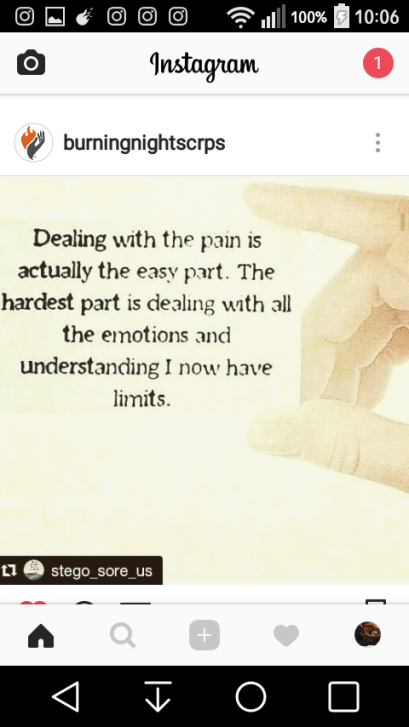 My doctor took at least 45 minutes with me to talk about how the migraine, fibromyalgia, and CRPS pain is affecting me mentally. If you haven’t guessed by the title of this blog, I am a ballerina, since 1980. I taught 3-11 year olds from 2005-2009. As some of you are aware, I’ve had many traumas to my right foot, including domestic violence traumas from my first husband. But the first Thursday this June will be the anniversary of my massive sprain in my solo in dress rehersal for the dance revue that basically ended my dancing career.  I believe it was not treated properly by the first local yokel I saw and I think that is because of my health insurance at that time.  It lead to further complications. Pile on some more traumatic injuries, including a car accident that the impact forced my foot off the break pedal and my foot went up under the dashboard and was pinned there by the motor, and I’m pretty messed up. Even though my foot looks normal and is now back to being a beautiful ballerina foot after my bunionectomy in October.  I have taken a ballet class here and there, but I haven’t been there weekly since 2009. My doc told me that she is an ice (skater) dancer, has been for decades. That’s how she copes. She said if she couldn’t get out on the ice and dance anymore she would be devastated. She would be pissed off at everything and everyone. In those few moments……a light bulb went on. One that my gut was trying to tell me for years, but I refused to hear what that red flag was saying. I. Am. Grieving. Holy Shit.

Then Wednesday I shared this light bulb moment with my chiropractor, who is equally awesome and listens and gives great advice. Both my family doc and my chiropractor and I discussed, in length, that it is time to feel these feelings and emotions. That it is time to stop stuffing them down with medications. It is time to utilize the coping mechinisms that I have been learning for 2 decades. I. Am. Ready. I went home and ordered a book that is published by Sounds True. It is called “It’s OK That You Are Not OK,” by Megan Devine. Who has the Refuge In Grief sites. I have been following Megan since her book was about to come out last fall. I had planned on reading it, eventually. I have been following her on Instagram. I received the book Friday from Amazon. I’ve attempted to start it. I thought I’d get so much read on Saturday because I had an MRI on my foot for two hours. Nope….even though my foot was the only thing in the tube, they wouldn’t let me have my book.

I had also ordered two other books on Thursday and received them on Saturday. “Unmedicated” by Madisyn Taylor, co-founder of Daily Om. She found a system that works for her utilizing the Four Pillars of Health. I also got “Sh** The Moon Said,” by Gerard Armond Powell, originally from my state. He has the Rhythmia Life Advancement Center in Costa Rica. He utilizes a full staff of medical personal, that help him teach classes, serve a plant-based diet for the length of the retreat, and perform Ayahuasca ceremonies to reboot your mind and detox your body. It is something I have been researching since 2013. I have had a few instances to go to a weekend retreat, but they all fell through, usually because of money. I have spoken to people who have done them and they are very gracious for the help and enlightenment it has provided for them. One of those is Graham Hancock, a journalist, author, and explorer of Ancient Civilizations from the UK. He shared with me back in 2013, when I contacted him, that I believe he had done 14 ceremonies at that time. He does one a year. It had helped him come off a 24 year regimen of anti-depressants. (His documentaries are awesome, by the way. Check him out on YouTube, FaceBook, etc.)

I am also in the process of purchasing the Oska Pulse from The Oska Wellness Company . It has been wittled down from huge rolling machines in hospitals to a hand held device that straps on where you are having pain. It utilizes PEMF – Pulsating Electro Magnetic Frequencies. I just found out it is actually based on Nikola Tesla’s research.  It is not a TENS unit. They use electric pulses that you feel working. The Pulse’s PEMFs are not felt. Users may feel a warming sensation in the painful areas, due to the circulation starting to function again. From the two ladies in a new CRPS support group I joined on Friday, testimonials. They can’t live without it. I am looking forward to ordering it next week. I am looking forward to feeling less pain. Of course nothing is going to bring back the bone that was removed in October or the nerves that were cut then, along with 2011 because of the intense pain. I’m hoping it will heal the damage done by the removed neuroma (an abnormal growth of a bundle of nerve endings). Somewhere in the past 10 day span, my squashed hope has grown and been revived.

So that is where I have been. While being severely depressed, and wanting to just fade away, I was still looking for things to ease my pain. My Story Isn’t Over Yet. ;;;;;;;;;;;;;;;

Never lose hope. Crash and burn if you must, but allow hope to grow out of the ashes.

Thanks for reading. Take Care. Be As Well As Possible. And Until Next Time. 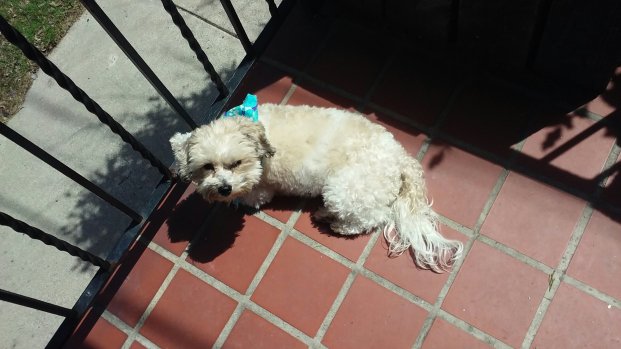